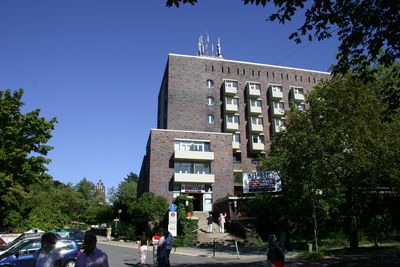 The "Ledigenwohnheim“, a hostel for single people, was built to the plans of Ernst Neufer in 1954/5 and is one of the five completed "Meisterbauten“ on the Mathildenhoehe in Darmstadt. Neufert’s plans were used in a slightly changed form by the "Bauverein“ for working class accomodation. The result was a six-storey apartment block with 156 small apartments, which was originally intended as homes for single people. In the building was also a laundry, a shop and a restaurant. At the start of the 21st century the building was completely renovated under the management of Ramona Buxbaum, whereby a number of larger apartments were created. The electric wiring and plumbing were modernised. Since it is a listed building, some apartments had to retain their original form.

The vouchers worth 10, 25, 50 or 100 euros can be bought online and in the Darmstadt Shop and can be redeemed in over 40 shops and restaurants in Darmstadt.