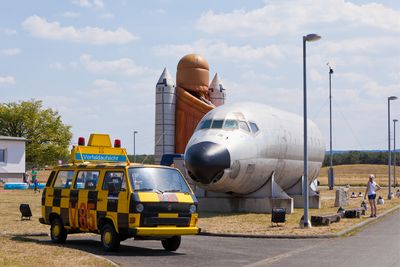 In 1908, the aviation pioneer August Euler established Germany's first officially recognised airfield on the "Griesheimer Sand". The US army used the airfield for their helicopters between 1945 and 1992.

A large part of the site has been a nature reserve since 1996. Together with the Technical University of Darmstadt, the Hessian Society for Ornithology and Nature Conservation has set up a permanent exhibition here.

The remainder of the site is used by the university. Lighting engineers, for example, test to what extent newly developed LED rear lights dazzle. Aerodynamic engineers test on two motor gliders how different factors impact the air flow around the aircraft under realistic conditions. Geodesists use the site to develop new applications for satellite navigation systems.

Next door to the airfield, the university owns with the wind tunnel, built in 1936 on the site of the German Research Centre for Glider Flight, a test centre for aerodynamic research for the Institute of Fluid Mechanics and Aerodynamics.

ℹ️ The Darmstadt Shop will be closed on Sundays during the Hessian summer holidays (until 2.9.2022). ❗️

The vouchers worth 10, 25, 50 or 100 euros can be bought online and in the Darmstadt Shop and can be redeemed in over 40 shops and restaurants in Darmstadt.